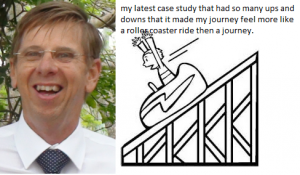 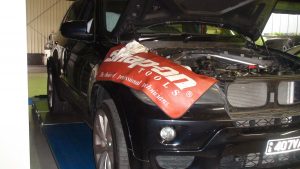 
This six cylinder diesel rocked up on the back of a tow truck. I started the car and wondered why the customer called a tow truck. His complaint was that the car was blowing so much smoke out of the exhaust it covered the whole street.

After a long idle time and a short drive we were seeing oil smoke coming out of the exhaust. It was so bad that when sitting at the lights I noticed that the guy in the car behind me had his phone out videoing the smoke. I jumped out to plead with him not to dob this car in to the authorities as I was the mechanic looking at fixing the problem. He laughed at me and said it was the funniest thing he had seen – a nice-looking BMW blowing out so much smoke. 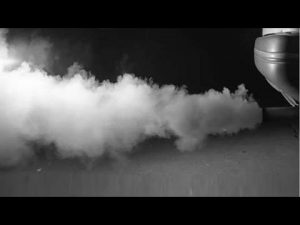 TaT’s diesel expert Clinton Brett taught me if you want to rule out the engine PVC and breathing system as being the cause of oil smoke, the easiest way is to remove the oil cap and see if the smoke disappears. So after undoing the oil cap and holding the engine RPMs up until all the oil smoke had disappeared, I left the engine idling for a long period with the oil cap off.

I talked with my customer about a direction and an action plan, I made it clear there was no guarantee that this action plan would fix his problem, but it was a necessary direction so we agreed we would replace the positive crankcase ventilation valve and I would use a BG109J oil flush to help clean out the crankcase system and hopefully the car’s breathing system.

Driving around the block to allow the oil flush to work its way around and clean up the crankcase, my technician said the car started to burn more oil than ever and then all of a sudden there was no more oil smoke.

We could not believe it. We then proceeded to change the oil and filter.

I drove the car around all weekend to be sure that the problem was solved.

After showing no sign of oil all weekend, I took it for one more test drive before handing it back to the owner. The smoke had returned, after that long idle period.

I suggested we remove the rocker cover and clean out the car’s breathing system, telling the owner that I could not guarantee this was the problem, but I needed to rule out the obvious.

What we found was a gooey, gummy, sticky mess. The intake manifold and EGR valve were also caked up with carbon. It was a big clean-up job. 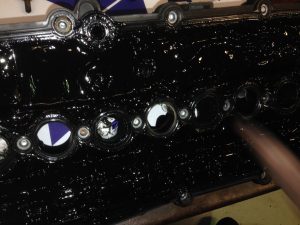 Then the car would not start. After finding out my technician had not first bled the fuel system using the scan tool, we hooked up to Autologic Assist, one of the most powerful aftermarket scan tools for European cars, especially BMWs.

The scan tool bleeding process is very straightforward and after a number of goes and still only seeing 2 to 4 bars of pressure, we proceeded to check the low pressure side of the vehicle.

This vehicle runs a lift pump in the tank and it has to run at about 4 bar (60psi).  There is a low-pressure fuel sensor that transmits a voltage signal to the engine’s digital management engine control unit. The Autologic Assist scan tool parameter IDs (PID) indicated the system pressure between the electric fuel pump and the high-pressure pump was correct. There was more than 4 bar of pressure so there did not appear to be a pressure problem on the low pressure side. 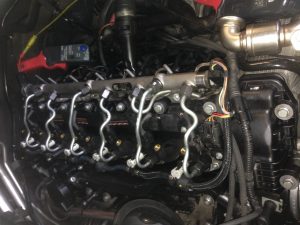 The idea was to crank the engine and watch the rail pressure increase. The ball bearings were then removed, one at a time, while rechecking the rail pressure to reveal which injector was leaking. Obviously the injector that loses all line pressure would be the culprit.

The problem was that the Autologic Assist rail pressure PID value did not change – there was still no rail pressure after all the injector feeds were sealed.

The higher the control signal current, the lower the rail pressure generated. This current to the FRV solenoid control is by way of a pulse width modulated duty cycle. Based on the fact that the higher the current the lower the pressure and therefore without current flow the maximum diesel flow would be achieved for the high pressure pump, the solenoid was disconnected.+

Still no joy – when the engine was cranked, there were still only 4 bars of rail pressure.

Now to the digital rail pressure regulating valve (DRV) located at the end of the fuel rail. For this test, the fuel return hose was disconnected. If the DRV was dumping fuel and not allowing the rail pressure to build up pressure it would be seen coming straight out of the return pile which is also at the rear of the rail. When the engine was cranked there was no sign of any fuel coming out of this return line.

Perhaps it was a faulty rail pressure sensor. Everything else was good so it could only be the sensor.

A variable resistor was used to manipulate the voltage to the signal wire. The value was adjusted on the scan tool to match the desired value of about 300 bars – still no start.

We had run out of ideas – time to call for help. At times like this the Autologic Assist team becomes the most powerful tool in the shop. Their scan tool is only part of the diagnostic package. The real strength is their team of OEM-trained technicians.

A help request was logged from the scan tool and we were soon talking with a BMW technician.

To everyone’s surprise, the engine fired up.

This made no sense.

My logic tells me that on the first engine cranking, the air that would have been trapped in the fuel rail caused a low pressure code and the digital motor electronics module shut the injectors off. Even though the codes were cleared and the rail bled of all possible air, there was still no starting this car. It was only after disconnecting the rail pressure sensor and then cranking the engine that a default value was set, followed by clearing the codes, that the system came to life.

The car was starting, but oil was still burning out of the exhaust when hot.  It was obvious that the oil sludge under the rocker cover was just the tip of the iceberg and a mere sample of the state of the whole engine. 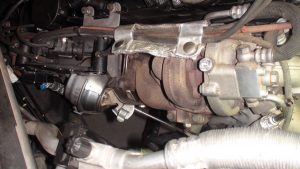 This engine employs two turbochargers of different sizes, connected in series. The smaller charger mounted on top is capable of developing its full effect at low revs, allowing turbo-lag to be kept to a minimum. As the revs rise, the second, larger, turbo takes over. 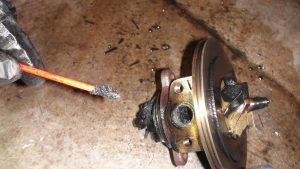 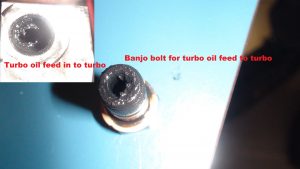 n was so bad , the oil sludge was a black tar that you could seal a roof
with. It gets stuck in everything and it was right through the turbos and had blocked the turbo return line.

The smaller turbo had to be rebuilt, and the larger turbo and all the pressure and return pipes were cleaned out.

It was obvious that when the first oil flush was done, some of the blocked oil in the return pipe was dislodged, giving temporary feedback to the sump. This can explain the lack of oil smoke until days after, when the sludge moved in and totally blocked this oil return, causing the oil to pool again in the turbos and eventually flooding the exhaust with engine oil.

By now, the extent of sludge could not be ignoredand it was obvious that the crank case of this engine would be contaminated.

The sump on these engines is not easy to remove. The front all wheel drive diff shares the same case as the sump and it could be up to a 15 hour job to remove, clean and refit. The oil condition sensor that sits in the bottom of the sump was removed and it was full of sludge.

Twenty litres of a concentrated and specially formulated chemical that would dissolve this type of sludge were tipped into the engine and left for two days. The chemical was drained out and the engine filled with normal oil.

After refitting the turbos, but not the DPF or exhaust, the engine was started and let run for an hour so the bottom of the turbo could be checked for any evidence of oil.

Oil did leak out of the bottom turbo, but it was cleaned up and the engine was run again and no oil came out. More test runs and it seemed the battle had been won.

The oil was dumped from the engine, and a borescope camera showed a very clean sump. After three oil flushes and a chemical clean-out the engine was much cleaner and safer than before.

The customer was advised to bring the car back after 5,000km for another oil flush and filter service.

This story doesn’t end there. The customer took the risk of refitting the DPF, knowing how much oil had been dumped into it, and the car continued to blow oil smoke that we suspect was the residue of oil in the exhaust. The customer was advised to take the car on a long run and eventually he reported no more oil smoke and the car was running better.

This episode confirmed the need for 10,000km service intervals for diesel vehicles.